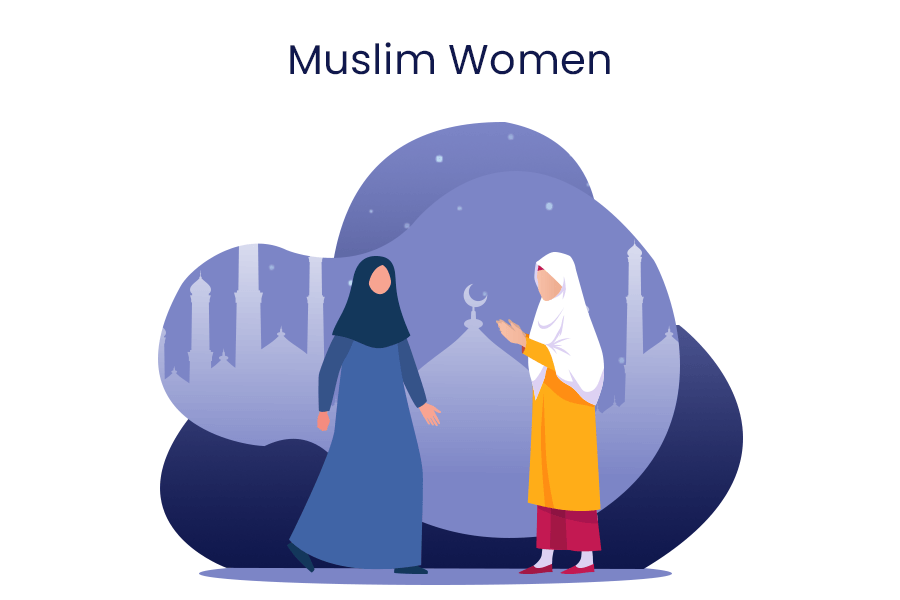 The various assistance of Muslim women throughout medieval and early modern Islamic history will be highlighted. While many people may be familiar with the actions of modern Muslim women, whether heads of state, scholars, or entrepreneurial activists, the fact that Muslim women also played a vital role in the pre-modern Muslim world as scholars, poets, mystics, rulers, and warriors tends to be less appreciated.

Islam raised the status of Muslim Women that even paradise was placed under Muslim women’s feet when they became mothers; they became the cause why fathers would enter paradise.

They were also made such an essential part of a husband’s faith that without praising his wife, his faith remained incomplete. Muslim women soared high and distinguished themselves in Islamic history with this newly acquired status.

Muslim women contributed to the heritage of Islam as scholars, jurists, rulers, warriors, businesswomen, and lawful experts. All his companions looked up to the Prophet’s household as a beacon of guidance. On International Women’s Day, we discuss a few Muslim Women from Islamic History.

Even before her marriage to the Prophet Muhammad (SAW), she was a significant personality, being a successful merchant and one of the honored figures of Mecca.

Born in 555AD in present-day Saudi Arabia, Hazrat Khadijah (RA) was well ahead of her time. She was a successful Muslim women entrepreneur, but she also defied some other stereotypes. She expressed her interest in marrying Prophet Muhamad (SAW), and once a married couple, and she continued to work and be a great success.

As well as being financially successful, Khadija was also influential in Prophet Muhammad’s spiritual journey. She was, in fact, the first who accepted Islam, the Prophet Hood of Holy Prophet (PBUH).

She believed in me when no one else did; she accepted Islam when people rejected me, and she helped and comforted me when there was no one else to lend me a helping hand.

Prophet Muhammad (SAW) was naturally nervous and confused on the first revelation. Yet Khadija believed her husband, encouraging him and supporting him right until her death in Makkah in 619AD.

When it comes to influential Muslim women in Islamic History, Hazrat Aisha, the wife of the Prophet Muhammad (SAW) ‘s name, comes more prominent. Hazrat Aisha had possibly the most influence on Muslim society after the death of the Holy Prophet (SAW). She played an influential role in the political opposition to the third and fourth caliphs Uthman ibn Affan and Ali ibn Abi Talib, even leading an army against the latter at Basra in 656.

Although she withdrew from political life after her defeat, she played a significant role as a transmitter of Islamic teachings started translating hadiths and spreading the Islamic word.

And it is also narrated that Holy Prophet Muhammad (SAW) said,

O, Fatima! If your wrath is incurred, it incurs the wrath of Allah; and if you are pleased, it makes Allah pleased too”.

Hazrat Fatima married one of the Prophet’s most Ali Abu Talib. The life of Hazrat Fatima’s influence on the Muslim women’s community remains one of the most powerful teachings of belief, devotion, modesty, and strength.

She passed away in 632 AD and, as per her will, was buried in an unmarked grave by her husband.

Zainab, the daughter of Hazrat Fatima Bint Muhammad (SAW), is one of the most influential Muslim women in Islam history. Living through a period of convulsive inter-fighting and the horrifying Battle of Karbala, Zainab continues to encourage millions in her brave devotion to both her family and her faith.

After the death of Hazrat Fatima, Zainab, along with her brothers Hassan and Hussain, were forced to defend their family from the war that broke out after the Prophet’s death over leadership. After the murder of her father, Zainab also witnessed the battles between her brothers and the Umayyad rulers.

During the Battle of Karbala, which witnessed her brother Hussain Bint Ali and many other family members brutally murdered, Zainab was compelled to march to Damascus in Syria under Yazid’s rule.

In the court of Yazid, Zainab stood bravely tall against oppression and injustice, calling upon the authoritarian leader to fear God and await his punishment.

Moved into expulsion after witnessing the death of her beloved family members, Zainab remained firm in her religion and persisted in helping spread the pure faith and devotion that her grandfather, the Prophet Muhammad (SAW), instructed as well. She continues to encourage millions of Muslims even today to stand up against oppression and stand for injustice no matter the costs.

Asiya, the wife of Pharoah

Asiya was not an ordinary woman; She was the wife of one of the most powerful men to walk the earth. Her strength and status will forever remain matchless.

She was a woman who never permitted herself to be defined or determined by her painful circumstances but instead carried in her such a deep faith and sense of self that she was willing to die for what she believed.

Asiya was not defined by the iniquity of the man she married. Her mind and her soul stayed independent from her husband. She refused to submit to her husband’s dictatorship but chose to righteous her soul and life to God.

For this reason, Prophet Muhammad (SAW) mentioned her as one of the most incredible women in Islam of all time.

The story of Asiya is an everlasting example for women in Islam who chose the Hereafter over all the luxuries of this world.

Maryam (as) is one of the finest  Muslim women in Islam History who ever lived, and there are indeed many lessons we can draw from her life.

As Maryam A.S is the foremost woman in Islam whose name is mentioned in Quran and Allah honors Her High ranks in the world and Hereafter.

As it is narrated in the Quran,

And [mention] when the angels said, “O Mary, indeed Allāh has chosen you and purified you and chosen you above the women of the worlds.

Shuhdah al-Baghdadiyyah, also known as Fakhr un Nisa, was a scholar, Muhaddith (scholar of hadith – the sayings of the Prophet PBUH) and calligrapher. Shuhdah lived in Persia during the 11th century. She dedicated her life to the pursuit and dissemination of knowledge.

She was rewarded with ‘Fakhr un Nisa,‘ which translates to ‘Pride of the Women.’

She studied with well-known scholars of her time, allowing her to memorize an extraordinary amount of hadith (the sayings of the Prophet (PBUH). Her articulateness and skill at writing were also renowned.

Muslim students would travel from all over the region to listen to her scholarly speeches on history, linguistics, art, and literature; with each speech, she left a lasting impression upon the hearts and souls of her audience. Her husband is said to have died after forty years of marriage which affected her greatly, but with great patience, she continued to devote her life to scholarship, both learning, and teaching.

She was given an estate by the Caliph at the time and used the funds to establish a higher learning institution where hundreds of students pursued their studies. All their expenses were to be paid for by Fakhr un Nisa herself.

Islam is a religion that promotes the concept of forever bettering yourself, primarily through continued education, and the legacy of Fakhr un Nisa illustrates this perfectly. As a Muslim woman and scholar, she is someone we can’t help but aspire to. Indeed the ideal image of a Muslim academic.

Khawlah was the daughter of the commander of the Bani Assad tribe. Her family was among the first who convert to Islam. Her father was either Malik or Tareq Bin Awse, also known as al-Azwar.

She was an Arab Muslim warrior in the service of the Rashidun Caliphate. She played a significant role in the Muslim conquest of the Levant and fought alongside his brother Dhiraar. She is represented as one of the most outstanding women in Islam history as a soldier. She was a companion of the Prophet Muhammad (SAW).

Her skills first appeared during the Battle of Sanita-al-Uqab in 634, fought during the Siege of Damascus. Her beloved brother Zirrar (or Daraar) led the Muslim forces and was injured and taken captive by the Byzantine army.

Khawlah accompanied the army and rushed on the Byzantine rearguard all alone. She was not recognized as a woman in her armor and the typical loose dress of Arabian warriors until Khalid asked her about her identity.

The Companion Ash-Shifa bint ‘Abdullah was one of the wise Muslim women of her time. She was a professional in general medicine and had a strong presence in early Muslim history. Her real name was Layla, and the title “Ash-Shifa” was derived from her profession in medicine.

Al-Shifa embraced Islam before the Hijrah and was one of them who migrated Makkah to Madinah earlier. She took the Pledge to the Messenger, expressing loyalty to him before witnesses when it was still a dangerous thing to do.

The Prophet Muhammad (SAW) gave her title to a house in the Hakakin area of Madinah. His value for her company controlled the caliphs. As Caliph, ‘Umar used to postpone her opinion. ‘Umar’s respect for Ash-Shifa’s competence, morality, and judgment led him to appoint her as an officer, or wali, in the administration of the marketplace. It makes her perhaps the first Muslim woman to hold an authorized position in public administration.

Ash-Shifa narrates a good number of ahadith. Many Companions narrate ahadith on her authority, including Hafsah. With her forceful personality, influential counselor, and multiple professional skills, Ash-Shifa bint ‘Abdullah must have been one of the powerful Muslim women in early Muslim society, probably a household name.

Samarqandi was born before Timur conquered the city and reached its true treasure. She was born when the city was under Mongol control – when they had pillaged the city and oppressed the people. But Samarqandi is one of those remarkable Muslim women who managed to appear in every era and every region. She is also one of the remarkable Muslim women in Islam history who have been lost in the annals of history and are overlooked today when talking about oppressed Muslim women or the “backwardness of Islam.” 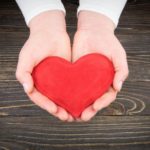 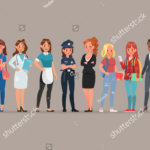