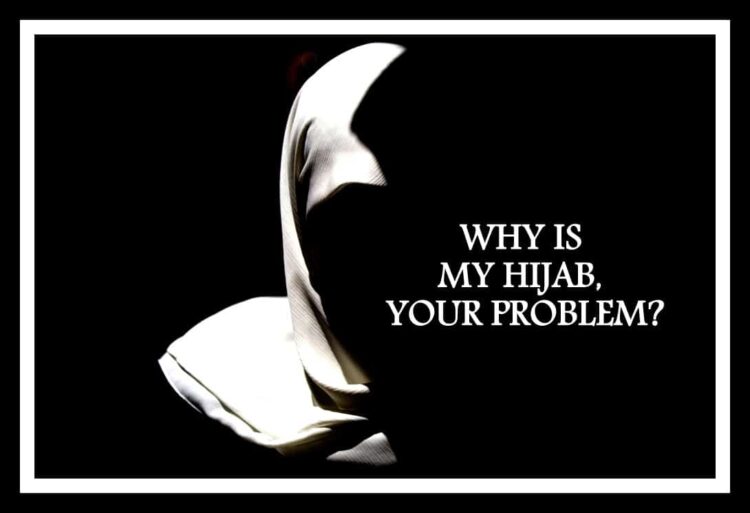 “I don’t think it is necessary to wear the hijab.”

We must ask if the person is truly convinced of the truth that is Islam?
And the clear answer given is: Yes, she is convinced, for she responds

“Laa ilaaha illallah!” (There is no God but Allah),

and then she says:

“Muhammadun rasoolullah!” (Muhammad is the Messenger of Allah).

Therefore, she is convinced of Islam as a belief system and a way of life.
So now isn’t hijab then a part of Islamic Law and an obligation? If you are convinced of Islam, how then can you not be convinced of its orders?
What do we call a person who says they believe but who nonetheless does not do what Allah or His Messenger have ordered? Certainly they can in no way be described as those whom Allah speaks of in this verse:

“The only saying of the faithful believers when they are called to Allah and His Messenger to judge between them is that they say:we hear and obey ‘ and such are the successful.” [Sura An-Noor 24:51]

How can you obey your parents and disobey Allah, Who created you and your parents?
The Messenger of Allah (sallallahu alaihi wa sallam) said in these words of wisdom:

“There is no obedience to the created in the disobedience of Allah.”[Ahmed]

Obedience to parents is not limited except in one aspect, and that is if they order to disobedience of Allah. Allah said:

“But if they strive with you to make you join in worship with Me others that of which you have no knowledge, then obey them not.” [Sura Luqmaan 31:15]

“My Job does not allow me to wear an Islamic dress”

It is not permissible for the Muslim woman to leave her home in any instance unless her clothing meets the conditions of Islamic hijab and it is a duty of every Muslim woman to know what they are. If you must go out, then do so only with the correct hijab, seeking the pleasure of Allah and the degradation of Shaytan. If your place of work does not allow it then try your best to find another job.
if you are really truthful in your intention and correctly determined in wanting to wear hijab you will find a thousands hands of good assisting you and Allah will make it easy for you! Is He not the One Who says:

“And whoever fears Allah and keeps his duty to Him, He will make a way for him to get out (from every difficulty) and He will provide him from sources he never could imagine.” [Sura At-Talaaq 65:2-3]?

“It is too hot to wear a hijab”

“The Fire of Hell is more intense in heat if they only understand.”[Sura At-Taubah 9:81]

Understand that Shaytan has trapped you and he is dragging you from the heat of this world to the heat of the Hellfire. Free yourself from his net and view the heat of the sun as a favor and not an affliction especially if it reminds you of the intensity of the punishment of Allah which is many times greater than the heat you feel now.

“I will never find a husband if I wear it”

Why will you want to marry someone who does not want to follow Allah’s commands?
Any husband, who desires that you be uncovered and adorned in public in defiance of and in disobedience to Allah, is not a worthy husband in the first place. As Allah stated:

“But whosoever turns away from My reminder (i.e. neither believes in the Qur’an nor acts upon its teachings) verily for him is a life of hardship and We shall raise him up blind on the Day of Resurrection.” [Sura Ta Ha 20:124]

Have you forgotten these verses:

“do not show off their adornment except only that which is apparent.”[Sura An-Noor 24:31]

and the statement of Allah Subhanah Wa Taala:

“Tell your wives and your daughters and the women of the believers to draw their cloaks all over their bodies.” [Sura Al-Ahzaab 33:59]?

Is there a greater blessing and favor upon the women than guidance and hijab?

“I wear it when Allah guides me”

Are you serious?
Hasn’t He already guided you by sending His Noble Quran and making you a muslim?

“I am still young I will wear when I get older”

How can you guarantee your own life until tomorrow?
The Angel of Death is visiting and waiting at your door for the order of Allah Taala to take your life at any moment. Death doesn’t discriminate between the young or the old.
We should all race to obedience to answer the call of Allah:

“Race with one another in hastening towards forgiveness from your Lord and Paradise the width whereof is as the width of the heavens and the earth.” [Sura Al-Hadeed 57:21]

The hijab is a high form of worship that is not subject to the opinions of people and their orientations and choices because the one who legislated it is the Most Wise Creator.
In the way of seeking the pleasure of Allah and in hope of His Mercy and success in His Jannah and throw those statements against the wall! Dust your shoulders off from their evil and focus on the prize. Hold tight to the rope of Allah by your molars and follow the example of the striving and knowledgeable Mothers of the Believers and the female companions (radiallahu anhum ajmaeen).

Your body is on display in the market of Shaytan seducing the hearts of men. The hairstyles, the tight clothing showing every detail of your figure, the short dresses showing off your legs and other body parts all anger the Merciful and please the Shaytan. Isn’t it time to liberate yourself?
In our Race to Jannah let’s get on the train of repentance, before it passes by our station. Deeply considering, what is happening today before tomorrow comes. Thinking about it, now, before it is too late!