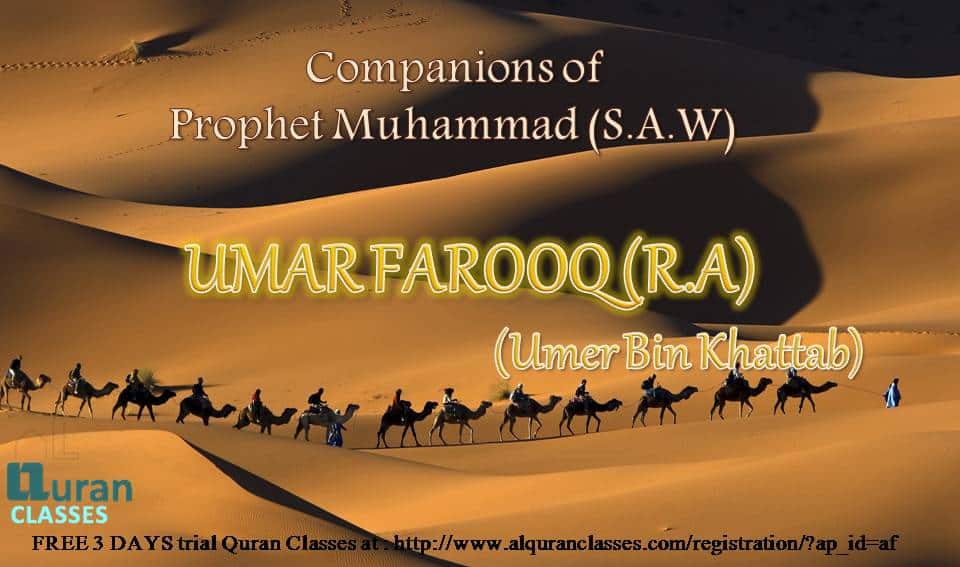 We read in previous part who was Hazrat Umar Ibn Al-Khattab and how he accepted Islam. Now we are continuing to know about his life journey. Hazrat Umar was very courageous and bold the Prophet (Peace be upon him) gave him a title of Al-Farooq. i.e, the one who makes a distinction between the right and the wrong.

The Muslims in Makkah had been horribly persecuted, some tortured to death, by the Quresh tribes and other Makkah tribes. Prophet (Peace be upon him) was determined to stay in Makkah, but encouraged other Muslims to flee to Madina.

Finally the Muslims learned that the Quresh planned to attack Prophet Muhammad in his home. He and his best friend, Hazrat Abu Bakr, slipped out of Makkah at night and started to travel north to Madina.

Prophet (Peace be upon him), though leaving Makkah to escape religious persecution, was worried about that the valuables he had been given to safeguard. His last act before leaving Makkah was to instruct his cousin and son-in-law, to return the money and valuables to the Quresh, the same people who were trying to kill him.

When the Muslims were ordered to migrate to Madina, most of them left Makkah quietly and in secret, but Hazrat Umar Farooq declared it openly.

He put on his armour and first went to the Kabah. After performing the Prayers, he announced loudly:

“I am migrating to Madina. If anyone wants to check me, let him come out. I am sure that his mother would cry for his life”

There was no man in Makkah to accept the challenge of Hazrat Umar Farooq. Then he migrated to Madina boldly.

His Services to Islam

Hazrat Umar Farooq participated in almost all the big battles: Badr, Uhud, Ahzab, Khaibar, Hunain etc.In the mission of Tabuk, he gave half of his wealth in the path of Allah. He was next to Hazrat Abu Bakr Siddique in the sacrifice of his belongings for the cause of Allah.

Prophet (Peace be upon him) also had a deep love for him. Once he said:

“Were a prophet to come after me, he would have been Umar.” [Bukhari]

In another Hadith, Hazrat Abu Hurairah narrated that Prophet (Peace be upon him) said:

“In Bani Isra’il (Israelites), there were people who were not prophets but talked to Allah. Were anyone in my Ummah like those persons, he would be Umar.” [Bukhari]

During Hazrat Abu Bakr’s illness he consulted the people about the next Caliph. And then gave his decision in favor of Hazrat Umar Farooq who took the charge after the death of Hazrat Abu Bakr Siddique 23rd August 634 AC.

The period of Hazrat Umar’s Caliphate undoubtedly is the Golden Age of Islam in every respect.

Within ten years of his glorious rule, the whole of the Persian Empire, Syria, Palestine, Egypt and a part of Turkey came under the banner of Islam and the nations entered the fold of Islam.

He enforced Divine Law (Shari’ah) as the code of a newly formed International Islamic State. He safeguarded the internal safety by introducing the police force. He gave incomes to the poor; He constructed cantonments and forts for the safety of Islamic armies. He founded new cities for the growth of Islamic culture and civilization; He improved agriculture and economics of the Islamic State; He founded the educational system in an Islamic State; in brief he was the founder of a great Islamic State.

Readers!! to be continued for covering other interesting stories related to Hazrat Umar Farooq and his martyrdom.