ARE YOU REALLY FASTING?

” Fasting is a protective covering for a man , as long as he does not tear that protection” [Nasai, Ibn Majah and ibn Khuzaymah]

There are six things about which care should be taken in fasting:

KEEP YOUR EYES UNDER CONTROL

” The evil eyes is an arrow of the devil. Whosoever out of fear for Allah, prevents himself from looking at evil, Allah shall grant him such faith, the sweetness and ecstasy of which he will feel in heart”

KEEP YOUR TONGUE UNDER CONTROL

2. Guarding the tongue against telling lies, unnecessary conversation, backbiting, arguments, swearing etc. Those who fast should avoid all non sensible talk, joking, arguments etc. Should anyone pick an argument, then say, ” I am fasting“. In other words, one should not start an argument and when someone else starts it then too one should avoid it.

One must particularly abstain from backbiting and lies.

KEEP YOUR EARS UNDER CONTROL

3. What should be avoided is that the ears should be kept away from listening to anything Makrooh (detestable). It is forbidden to say or listen to anything which should not be said.

KEEP YOURSELF UNDER CONTROL

4. The rest of the body should be kept away from sin and evil. Neither should the hands touch it, nor the feet made to walk towards it. Special care should be taken, especially at the time of Iftar (time to break the fast). When a person fasts, and at Iftaar time breaks fast with forbidden food, he becomes just like a sick person who takes medicine to cure him of the sickness but also adds poison which destroys him.

5. After having fasted it is not advisable to fill the stomach completely with food at Iftar, because then, the object of fasting is defeated. Whereas it helps to diminish ones carnal desire, it also strengthens the angelic qualities of man and increases the illumination of the soul. For eleven months we have been eating and drinking. What harm is there if one eats less for only one month.

We have a bad habit of filling our bellies at Iftar, thus increasing our average consumption. Many such things are eaten which we normally do not eat at other times. In fact, during Ramadan we develop this type of habit. ”

In Marquis Falaah it is written,

’ Do not eat excessively at sahri as the prosperous ones do, for this is the way to lose the object of fasting”.

6. After fasting one should always have fear and anxiety as to whether one’s fast had been accepted or rejected by Allah. One should fear that Allah may reject one’s deeds. The fasting person must at all times safeguard his Intention and at the same time fear for its adulteration. He should also constantly make dua’ that Allah makes this a cause for His pleasure.

These six things are compulsory for all the righteous ones.

FOR AN EXCEPTIONALLY PIOUS

7. As for the exceptionally pious ones a seventh point is added. That is, during fasting, the heart should not be turned towards anyone else except Allah, so much that during the course of the fast it is a defect to worry whether there shall be something to eat for if’taar.The Qur’an commands,

“Fasting has been prescribed for you”.

The commentators of the Qur’an say that from this verse it is deducted that fasting is made compulsory for every portion of the body.

May Allah help us in implementing what we write and read and to gain maximum reward’s from the month of Fasting. Ameen 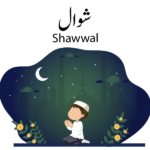 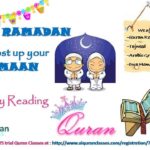 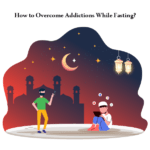 How to Overcome Addictions While Fasting???