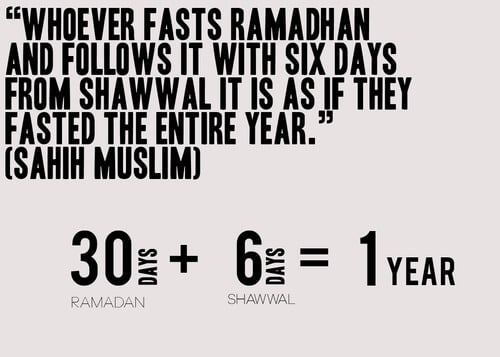 The month of Ramadan has ended, and most of us are in grief for it being apart. But Ramadan has left us with another blessed month of Shawwal.  But there are hadiths about fasting in the month of Shawwal. Well, one cannot compare the descendant month of Shawwal with Ramadan in its glory, but still, it has its importance and dignity.  One of the exemplary aspects of Shawwal is that Allah Almighty has chosen it for the celebration of “Eid-ul-Fitr.” Yet another specialty of this month is the opportunity of fasting six days of Shawwal.

Hadith on the Fasting in the Month of Shawwal:

The Messenger of Allah (peace and blessings be upon him) said,

“Fasting Ramadan and following it with six days from Shawwal is like continual fasting.” [Muslim, on the authority of Abu Ayyub (Allah be pleased with him)]

So Ramadan is like fasting 300 days and fasting six days of Shawwal like fasting 60 days. The Prophet (Allah bless him and give him peace) himself stated this explicitly:

Is it Sunnah or obligatory?

Hadith about the fasting in the month of Shawwal has have made us clear that these fasts have many rewards. There are often found various confusions about it, for example:

Can one combine six fasts of Shawwal with makeups fasts of Ramadan?

Should fasts in Shawwal be consecutive?

First of all! These facts are not obligatory ( Fard); they are Sunnah! It is good to fast in Shawwal, as it would increase your reward and bring the pleasure of ALLAH. But it is not compulsory. Secondly, The Shafi`is and Hanbalis state that it is superior to make the six fasts consecutive it means it is not preferable to start Fast from the 2nd of Shawwal and keep fasting up to the 7th of Shawwal. However, if they held on other days, it is hoped that .it may also fulfill the requirement of the above Hadith.

Now comes the matter of combining fasts of Shawwal with make-up fasts of Ramadan. Making-Up missed Ramadhan fasts (Qadha) and the six fasts of this month, one should principally make an intention of Qadha. After that, as a ‘secondary’ purpose, one may also keep in mind that it is the month of Shawwal. By doing so, it is hoped from the mercy of Allah that along with the missed fasts being made-up, one will receive the reward of fasting. But, the primary and predominant intention must be to make up for the missed fasts.

However, one should make up for the missed fasts separately from fasting the six days of Shawwal, since some scholars believe that one does not receive the reward of optional (Nafl) fasting when combined with makeup (Qadha) fasts.