“Read Ayatul Kursi full, it will protect you, your children, home and even those houses surrounding your house.”

Everybody realizes that the Quran is an awesome approach to keep bad things away and find out about anything you have to know to carry on with a favored life. However, the prophet Muhammed PBUH talked about “Ayatul Kursi,” which gives its reader great advantages in this life.

It is reported from Hadhrat Asked Baqri that Nabi (SAW) came to the abode of the Muhajireen when one person asked,

“In the Qur’an Kareem, which is the loftiest Ayat?”

The 255th verse of Surah Baqarah is known as Ayatul Kursi. It is one of those verses memorized by all Muslims around the world in light of its virtues. It is significant and has numerous advantages, some of which include:

Allah’s Apostle ordered me to guard the Zakat revenue of Ramadan. Then somebody came to me and started stealing the foodstuff. I caught him and said, “I will take you to Allah’s Messenger (ﷺ)!”. Then Abu Huraira described the whole narration and said:).

That person said (to me),

“(Please don’t take me to Allah’s Messenger (ﷺ) and I will tell you a few words by which Allah will benefit you. When you go to your bed, recite Ayatul Kursi (2.255), for then there will be a guard from Allah who will protect you all night long. And Satan will not be able to come near you till dawn.)”

(When the Prophet (ﷺ) heard the story)

“He (who came to you at night) told you the truth although he is a liar, and it was Satan.

When the time approached for her delivery, then Nabi (saw) ordered Hadhrat Umme Salama (R.A.) and Hadhrat Zainab (R.A.) to go to Fatima and recite Ayatul Kursi full. And “Inna Rabba Kumullaah” (the whole Ayat) and the last two Quls and blow on her.

In a difficult time:

Which was the most (Arabic) (lofty, respectable) Ayat revealed to you?

Here are some of the many advantages of these verses :

So don’t miss out on the beautiful reward and blessings of reading this Ayatul Kursi and learn it. Also, teach your families, kids, friends, and all the Muslims about the great virtues and benefits of the greatest Ayah of the Glorious Qur’an. 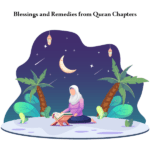 Blessings and Remedies from Quran Chapters 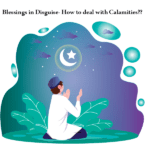