Who Is Muhammad (S.A.W.W): A Poor Man Gift to Prophet “who is Prophet Muhammad (S.A.W.W)”? is some often question,

Even sometimes make jokes about the prophet saying, “Ooooh! Who is Muhammad”. Remember, your best response would be to show them by your actions that who Mohammad (Sallahu Alayhi wa aalihi Wa Sallam) is.

Dear Muslims, do not frustrate the behavior of those people around you. Most of them have no idea of our beloved Prophet Muhammad (peace be upon him). In such a case, it’s your responsibility to tell them and show them who Muhammad is, what an epitome of morals and characters he was, how kind and merciful he was! Tell them, educate them, show them by your manners that you are following the most excellent History leader.

Story of A Poor Man to show, Who is Muhammad:

He was a poor man who could not afford more. His face was glowing with happiness as he offered his small gift. It was evident that he loved the Prophet a lot.

The Prophet (Sallallahu Alaihi Wasallam) thanked him graciously. Then, as the man looked at him expectantly, the Prophet ate one grape. Then he ate another one.

Slowly the Prophet finished the whole bunch of grapes by himself. He did not offer grapes to anyone present.

The poor man who brought those grapes was very pleased and left.

Now know that who is Muhammad, The companions of the Prophet (Sallallahu Alaihi Wasallam) who were around him were surprised.

Usually, the Prophet (Sallallahu Alaihi Wasallam) shared whatever he got with them. Then, he would offer them whatever he was given, and they would eat it together.

Usually, he would start first, out of respect to the person who had given him the gift. But he would always offer it to others.

This time had been different. Without offering it to anyone, the Prophet (Sallallahu Alaihi Wasallam) finished many grapes by himself.

One of the companions asked respectfully,

“O Prophet of Allah! How come you ate all the grapes by yourself and did not offer to any one of us present?”

Please remember this story and also share it with friends. That’s the best way we respond to the ignorants.
He is Mohammad (SAW)! 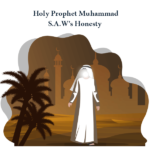