How You’re Supposed To Offer Salah When You’re Sick? 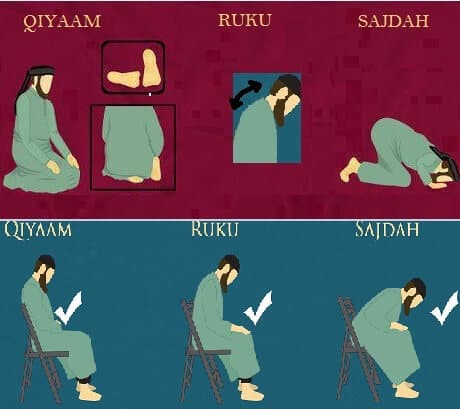 How to offer salah when we are sick? All of us suffer from sickness. It’s a natural process, but many of us never pay attention to remembering Allah S.W.T during illness. Many times we neglect our Salah when sick. Because the only thing that revolves in our mind is ‘Fast Recovery.’

Whatever the circumstances are! No one can avoid Salah. Because Salah is obligatory, and there is only a penalty for neglecting it.

Qur’an Mentions About How To Offer Salah When You Are Sick:

Whoever has some excuse due to illness and cannot stand during the obligatory Prayer is allowed to pray sitting. If he cannot pray in a sitting posture, he may pray while on his side by making gestures. His gestures for sujud(prostration) should be lower than those for his raku`(bowing) in such a case. This principle is based on Allah’s words:(And celebrate Allah’s praises, standing, sitting, and lying on your sides).

Islam is a flexible religion, so there are soft corners as well. If someone is too weak to stand for Prayer, he can offer Prayer while sitting. If one is unable to sit, then he can lay on his back and offers Salah. While lying, and even if someone cannot lie down but can not bow or prostrate, he can offer Prayer while hinting; this is because obedience to Allah SWT is according to ability.

Reference is taken from Bahishti Zewar

In Case Someone Can Stand:

We never know when our last Prayer would be. So, make the most of it and offer every Salaah as if it will be the previous Salaah may be.

Regardless of the severity and seriousness of the disease, daily prayers have to be observed at the prescribed times. If a sick person cannot perform all the articles of Prayer, he may perform only those he can.

May Allah SWT protect us from all diseases. And Give Fast recovery and Health to all sick people around the world. AMEEN.