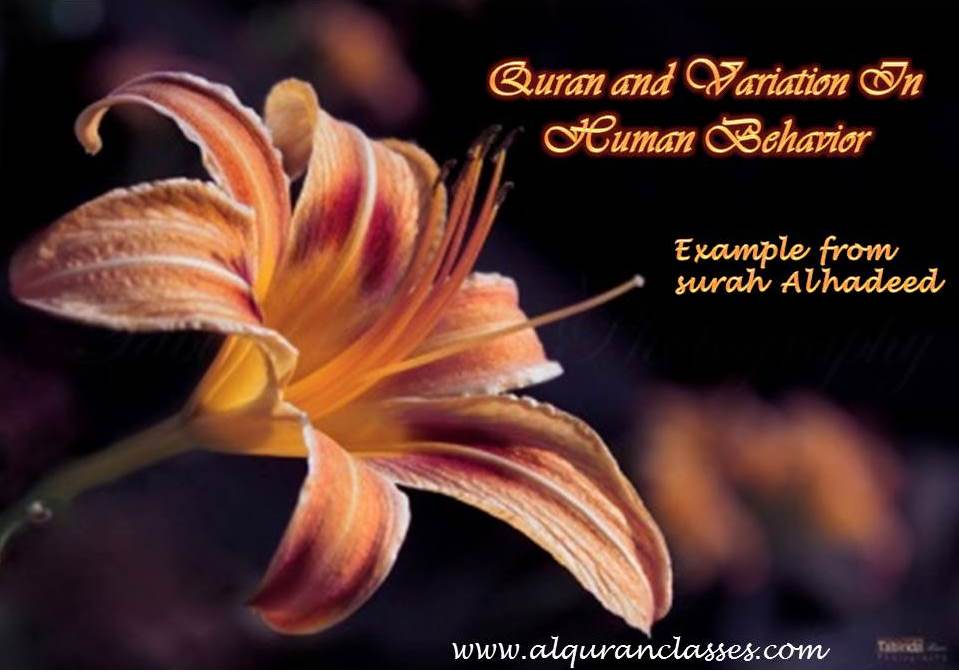 Since child hood till death, Human behavior is subject to constant change. Passing through various stages, learning through different experiences, it modifies its behavior accordingly. All this change depends entirely on the inputs one receives.It depends upon how child is brought up. His responses and reflexes depend upon how he builds them. That is human behavior and AlQuran the magnificent , explains this changing attitude of majority of us human beings in a very beautiful way. And it has also categorized this behavior or attitude towards life , in four phases with respect to time. In surah hadeed , ALLAH subhana hu wa tala says:

“Know that the life of this world is but amusement and diversion and adornment and boasting to one another and competition in increase of wealth and children .”Al hadeed (57:20)

this ayah, beautifully comprehends the 4 phases. لَعِبٌ وَلَهْوٌ  1st phase being of amusement and joy, in other words childhood ,

the fourth phase being middle aged وَتَكَاثُرٌ فِي الْأَمْوَالِ وَالْأَوْلَادِwhen everyone is busy children and earning more and more money.

This phase starts from the very first moment when a human born, this is childhood, or early teens. As that little being is new to the world, so every thing is novel and different for him. He stares at colors of life in amusement. He has his care takers and lovers all around him, there are no duties assigned to him yet. Every thing is mere joy and play. Exactly same thing is told in this ayah “لَعِبٌ وَلَهْوٌ ” means amusement and joy , game or playful activity , diversion. He just experiences or learns, there is no productivity as such in this phase.

Then comes the next phase, when one starts getting idea of worldly matters a little bit. When one starts implementing what he learned in previous phase. It ranges from early teens till late 20 [14-25]. In this phase, maximum of us are involved “َزِينَةٌ “ which means adornment , beauty , show off .

This is the phase when a child starts paying attention to its outer looks and dressing etc. And its true ! it’s the age in which we are most concerned about our looks, beauty, who has the latest cell phone ? who is wearing the cutest dress ? my nail polish doesn’t matches my purse ! How are we going to dress up in coming farewell party of collage ? these are the most important matters of our lives when we are passing through our teen ages. Obviously there is no burden of earning on an individual yet.  We see how a transition took place in human behavior and quran mentioned it.

This phase ranges from 25- 35 After passing his early twenty’s , slowly and gradually different responsibilities are assigned to him. Now life isn’t just being all wishes fulfilled , it something more than it. Now if he wants to wear a branded shoe, he has to find a way to earn it. Jobs, marriages etc are part of this phase. So a rat race starts of being a head of each other in every aspect of life. if one gets good job, he boasts about it , a feeling of surpassing every thing. Again there is a change in human behavior and quran quotes it as “تَفَاخُرٌ بَيْنَكُمْ  “

It ranges from 40 till death. Rat race gets on its peek now. As now he has become a parent, so responsibilities and expenditures have been increased. Definition of successes is modified now, one having high bank balance is not a happy successful man if his child stands no where in society. Now success is tethered to the success of his children.

If you ever notice, in when you are young, people address others  like “ oh ! he ? who is manager in XYZ leading company ? “ or “our fifth neighbor who is primary teacher in school “. but in this age, when you have your kids grown up, you are addressed like ” oh ! mother of lawyer in supreme court ? ” , ” that old man in street ,who as four sons all in army ? “. now  persons success factor is success of his/her children. So,its true that your life above 40 is just ” تَكَاثُرٌ فِي الْأَمْوَالِ وَالْأَوْلَادِ “. It is just expansion of wealth and your children.