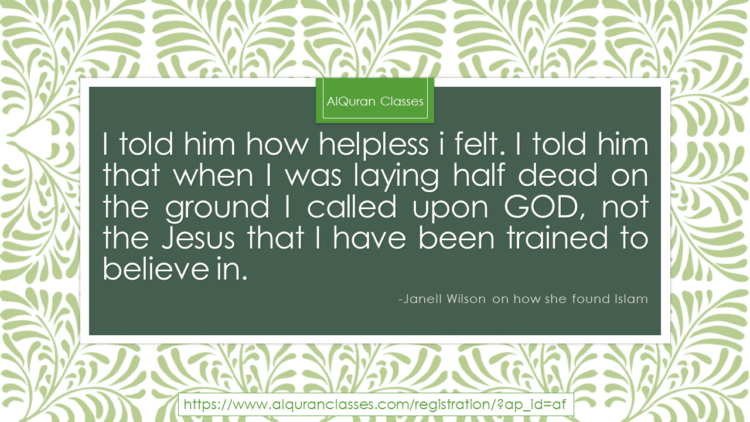 Below is my story to know the purpose of life when I truly understood the meaning of life.

Assalam -O- Alaikum! I am Janell Wilson, and this is my Story of how I reverted to Islam which goes back to when I was 18.

I’m 42 yrs old now; I grew up in a Midwest state in Minneapolis, Minnesota. I was raised as a Catholic. Even at a young age, I knew being Catholic was wrong. I was not too fond of the way the nuns in school used to beat us. No matter what you do, you are going to hell. All these things raged me.

I rebelled, and I rebelled for a very long time. Probably my first apparent act of rebellion was by age 11. I ran away from home, and I never went back until I had my second child. I was married to a Muslim and didn’t even know it, Alhumdulliah!! It feels as my husband is the best part of the Story.

As a spoiled person, during that time, if I wasn’t at home, I was on the streets. I robbed, I sold drugs. I did almost anything you can imagine. I did it from age 11 until I took the Shahadah in the year 2000.Story of Janell Wilson

The Turning Point In My Life: Purpose of Life:

It came when I finally met my husband. I was turning 21. I met him after serving two years and a few months in prison. I was with him and have been for 22yrs, Alhumdulillah!! My husband is a self-taught man of Islam. He has a passion for learning the culture; he knows about hundreds of other religions. He is kind, funny and he loves me no matter what I have done. Even if my actions were wrong or hurtful, Our losses, gains, happiness, and sorrow were all together. We’ve suffered and endured everything together. He always had my back. He still has good intentions in his heart.

Unfortunately, during our marriage, I made many mistakes. I was still outselling drugs along with my father, brother, and sister. When I reflect upon my past, I thank Allah that I got away from the evils of the streets. Out there, I’ve seen horrible things. I saw Dead people, loved ones lost, rape, carjacking, robberies, drug abuse, and whatnot. The lifestyle that came with such habits was deadly. I, too, had to bear the consequences of these sins. Story of Janell Wilson

I remember that day very well. On a beautiful day in 1999, I was out for my regular drug dealing in a normal part of my town. Suddenly a stranger attacked me out of nowhere. I wasn’t even able to protect myself. He cut my throat and stabbed me six times, and left me assuming that I am dead!!

I called God at that time when I was lying helpless and half-dead on the road. I cried. That was when I felt the need for someone superior, someone mighty enough to cause a miracle, which is significant to bestow my life. I was in the hospital for about a week. When I went home after being discharged from the hospital, my husband was not there. I saw my dad. I told him how helpless I felt. I told him that I called upon GOD when I was lying on the ground, not Jesus, that I’d been trained to believe. I knew I was looking for something higher than me, more significant than Jesus.

I didn’t find Islam until a year later, in prison. Miraculously, it just so happened to be a class about the teachings of Islam. I was bored, and so I thought of going to that class just randomly. There I talked with the sisters. I asked them questions. They gave me a book called “The Brief Illustrations of the Teachings of Islam.”

Now in this book, there are five concrete things. Prophet Muhammad prophesied how the babies formed in the womb, the different oceans and seas, salty and non-salty, the thunderstorms and mountains, and ants colony work. All these facts were very eye-opening. I kept on thinking. How can any human being, who lived 1400 years ago, possibly know all these things that scientists have just proven in the last 60/70 yrs?

Finally, the people who gave me that book returned to prison two weeks later, and I took the Shadaah. I declared that there’s nothing worthy of worship except Allah and Muhammad is the last prophet of Allah and that Islam is the only true religion.