Husband and Wife in Jannah 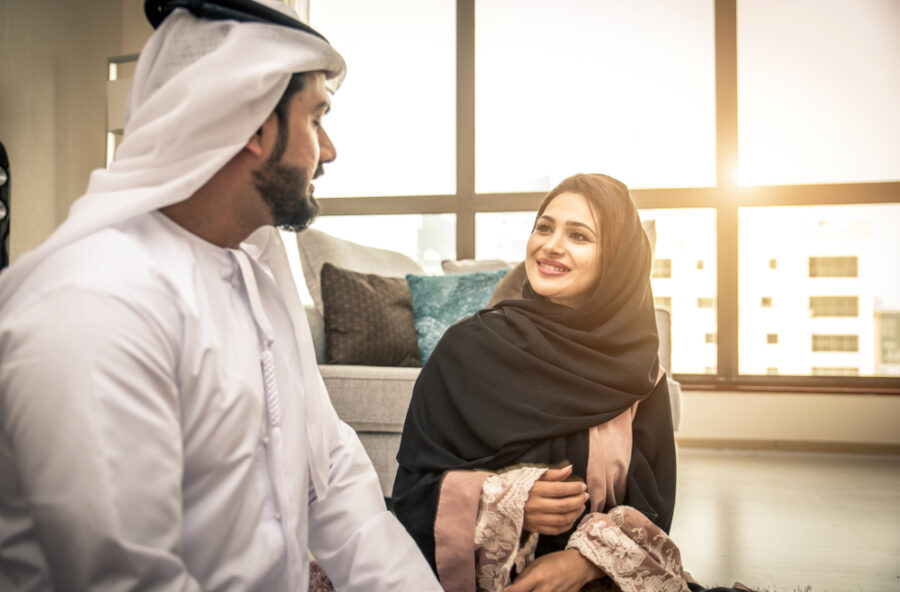 When the hour of judgment is over, the spouses who practiced Islamic teachings and followed the commands of Allah Almighty will enter Jannah together. From then, the husband and wife in Jannah will live together and have feasts in Jannah.

There togetherness has been indicated in Quran as follows:

“They and their wives will be in pleasant shade, reclining on thrones.”

“Enter Paradise, you and your wives, in happiness.”

For ending up together in Jannah, we have to understand Marriage and its elements. So let’s have an in-depth discussion about this relation and its intricacies.

Marriage is among one of the signs of Allah. It is Allah who has put fascination and an appeal for one another in the accomplice’s heart. Both are indispensable and essential for one another. Marriage is a model of harmony and serenity. (لِّتَسْكُنُوْٓا اِلَيْہَا) Husband and wife in Islam are deficient without one another. Peace is accomplished when they meet up and supplement one another. Love for wife is highly appreciated and stressed upon in Quran and Sunnah. Respect and love of a husband are also asserted in Quran and taught by Prophet Muhammadﷺ.

The key to the strong basis of this relationship isn’t riches, excellence, or ancestry. Instead, it is characterized by love and leniency. Human existence stands firm depending on affection and leniency. In case, there is no affection and leniency after marriage, it implies that life is unstable. If a couple incorporates such elements that are commanded by the Creator and His Apostle Muhammadﷺ, they will reap a beautiful husband-wife relation throughout their lives and get one another’s companionship in Jannah as well.

Relationship Between Husband And Wife:

Between husband and wife, there is a relationship of Love and Mercy.

A building structure does not stand firm, just based on solid blocks. Basically, laying blocks on top of one another does not strengthen a building. The material put in between the two blocks binds the two together. The strength of the materials won’t permit the blocks to separate in any event, even during tremors. It is love and leniency which ties the couple together and gives solidarity to this beautiful relationship. It supports this relationship regardless of the toughest times and the most unsavoury conditions.

In the initial stages, love and leniency, when the couple grows old and feeble and cannot serve one another, fortify the relationship. It is between two grown-ups, yet their kids experience childhood in the shade of mercy. Love involves equality. However, leniency incorporates sacrifice. It implies this relationship won’t get by just serving each other similarly. The feeling of penance is required in some cases. Allah has put these feelings directly at the start to prevent cutting off of this relationship.

“And one of His signs is that He created mates for you from yourselves that you may find rest in them, and He put between you love and compassion; most surely there are signs in this for a people who reflect.”

Love For Wife In Islam:

There is a strong emphasis on developing love and respect of rights of wife.

Allah Almighty in Quran and Prophet Muhammadﷺ through his Sunnah and Ahadees have taught and commanded Muslim males to fulfill the rights of their wives and have kindness and love for them.

Mentioning particularly about rights, In Islam, the wife’s rights are not limited to the provision of enough food and clothes, along with shelter for her whole life. These are just the basic needs that ought to be fulfilled in any case. Beyond the basic needs, the Creator has created pairs to love and feel each other, support and hear to each other, and be one another’s place of peace where both can have a sense of security, acceptance, and appreciation.

“My brother Jabrail has informed me and emphasized so much about women that I thought a husband does not have the right to utter ‘Ugh’ to her.”

The last will of Holy Prophet Muhammadﷺ was:

“He emphasized prayers twice. Do not assign your slaves and servants any responsibility beyond their capacity. For the sake of Allah! Look after the women. They are the trusts of Allah in your hands. You have sought them after you made a covenant with Allah, and she became your wife in the Name of Allah.”

By showing your wife appreciation and recognizing her persistent effort, you will invoke a sense of achievement in her, which will help keep her inspired to accomplish the difficult work she does. It also implies that if you are thankful for your better half, you are appreciative to Allah for a gift to you with her companionship since it was Allah Almighty that allowed you the chance to unite through marriage. Thank your spouse regularly and reveal that you like all her work and exertion and say Alhamdulillah for her company.

Sweet words don’t cost a lot however can fill a lady’s heart with happiness.

Scholars say that expressions of adoration and warmth that are not improper are really Sunnah. Kissing your better half every time you show up home is a statement of adoration and appreciation, and it is Sunnah. The Prophet ﷺ was used to walk into his home and show fondness to his spouse.

Prophet Muhammadﷺ encouraged followers to give gifts to one another. It fills love in their souls towards one another.

“My son, exchange gifts, it will bring about love between you.”

A man should be his better half’s most prominent help, and he should offer to assist her with any chore, regardless of whether it is huge or little. One’s wife needs to feel like cooperating to fabricate your family and keep up your home.

The Prophetﷺ assisted in daily house chores, and used to serve his family frequently.

“I asked ‘A’isha, (may Allah be pleased with her) ‘What did the Prophetﷺ do when he was with his family?’ She replied, ‘He would do chores for his family, and when it was time for the prayer, he would go out.’”

Studies show that couples that are best friends had a considerably more satisfying marriage. Our best illustration of this is Prophet Muhammad ﷺ and Khadija (may Allah be pleased with her). They suffered such a great deal together, from deep sorrow, family relinquishment, blacklist, and even starvation. But then they were each other’s pillars of solidarity, supporting each other through trial and trouble. Allah guaranteed Khadija (may Allah be pleased with her) an extraordinary spot in Paradise because she made a particularly calm, cherishing climate at home.

The Prophet ﷺ described her saying:

Love For Husband In Islam

A wife should be adored and loved as commanded in Islam. But a woman is also emphasized by Islam to love her husband and fulfill his rights.

There can be a long discussion on the husband’s rights and the rewards for a wife to fulfill those rights, but what a great thing it would be if the citation of a single event covers it all.

Here is an event from Life of Holy Prophet (P.B.U.H) About Husband And Wife Relation:

Asma, the wife of Ansaar, came into the presence of Holy Prophet Muhammad ﷺ. He was with his companions. She said to him:

“My parents be your deliverance! I have come to you as a representative of some women. May my life be sacrificed for you. If any woman, in the east or the west, gets to know that I’m in the presence of your eminence, she would also say whatever I said.

Allah has sent you as a Messenger for men and women. We have developed faith in you and believe in the God who has sent you ﷺ as His Messenger.

We, the group of women, are confined to the house’s four walls, and we have to stay in our houses. Women fulfill your requirements and nurture your children, whereas you men have a higher status than us. You participate in the Friday prayers, aggregations, visit and service the sick, participate in funerals, perform Hajj, and most significantly, do battles for the cause of Allah. When you step out of the house for Hajj, Umrah or guard the boundaries, we look after your wealth, prepare clothes for you, and train your children. Will we be included in the reward with you?”

Upon hearing this, Holy Prophet Muhammadﷺ turned towards his companions and said:

“Have you heard anything in religious matters better than this from any woman?”

“We can’t imagine that a woman can put forth anything better than this.”

Then Prophetﷺ turned towards her and said:

“Go back and inform all women that anyone of you who takes care of her husband, satisfies him and acts as per his wishes, then it is equal to all those rewards.”

On hearing this, the woman went back in a state that her face was brimming with joy and was constantly reciting ‘There is no God but Allah’ and ‘Allah is the Greatest.

Will Husband And Wife Meet In Jannah?

Islam has guided us on the way to live a satisfying life. Be calm despite the thunderstorms outside the house, i.e. to develop such beauty and profound solidarity in the relation of husband and wife that can lead the accomplices through all the thick and thin of life and make their way to be husband and wife in Jannah.